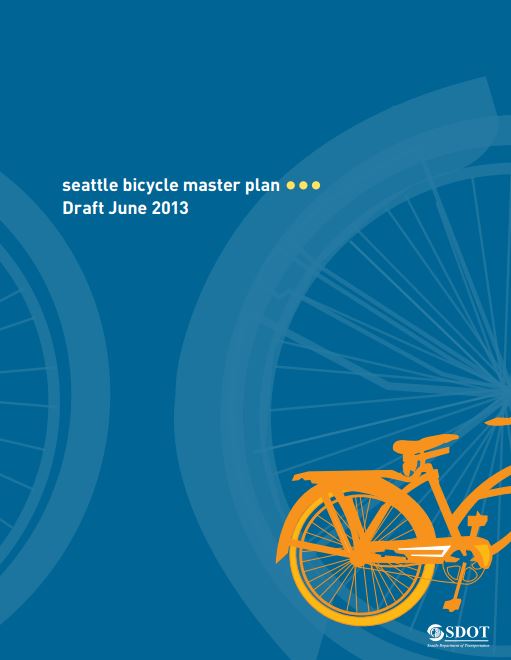 UPDATE: Last week, the City and those along Westlake Ave North who sued to stop the Bike Master Plan update reached an agreement. As such, the Bike Master Plan will continue to move forward under Council for review and adoption.
Over the past couple of years, SDOT has undertaken an update to the City's Bicycle Master Plan (BMP). The BMP is a document with a 20 year planning horizon and is intended to guide policy and budget direction.  The City had a huge public engagement process to gather input prior to issuing the Draft BMP in mid-2013. The Draft BMP included a variety of bike facilities, including neighborhood greenways and cycle tracks. Cycle tracks are bike lanes that are separated from vehicle traffic.

Recently, we were made aware of a flyer (PDF) passed out to businesses along 35th Ave NE by a person/group identifying himself as the "35th Ave NE Committee."  This flyer explains that a cycle track is proposed on 35th Ave NE, describes what this person believes would happen to 35th Ave NE should a cycle track be developed, and advocates for the business owner to contact the City to voice their concerns.  The flyer was handed out by one of the people responsible for organizing the opposition along NE 65th Street.

The 35th Ave Committee has not taken a position on the cycle track on 35th Ave NE.  We are not advocating for or against it, but have been aware of SDOT's plan.  PLEASE NOTE THAT THIS LETTER IS NOT FROM OUR COMMITTEE AND DOES NOT REPRESENT OUR COMMITTEES GOALS OR OBJECTIVES.

Earlier this week, a lawsuit was filed against the City by a group of business owners on Westlake to delay the adoption of the updated BMP.  At this point, it's unclear when/if the BMP would be updated given this recent legal wrinkle.
Posted by Per at 7:38 PM