The Puget Sound Regional Council has recently released its Draft Public Review Version: 2012 Land Use Forecasts.  Based on this report and its forecast results, the "Wedgewood/View Ridge" Forecast Analysis Zone (FAZ) is projected for growth over the next 30 years. The information within this report reinforces the reality that change is inevitable for the 35th Ave NE corridor.

Before we summarize the results for the "Wedgewood/View Ridge" FAZ, there's a few things that need to be explained. First, I've already pointed out to the PSRC that Wedgwood is spelled incorrectly.  Secondly, this FAZ (6226) includes all of Wedgwood and portions of the View Ridge, Maple Leaf, Meadowbrook, and Ravenna-Bryant neighborhoods (Census Tracts 20, 21, 22, 26, 25, 24, 38, 39, and part of 40).  So, despite its name, it is comprised of numerous communities that surround the 35th Ave NE corridor.

According to the PSRC's data, the total population of this FAZ grew 104% between 2000-2010, from 28,982 in 2000 to 30,094 in 2010. During this same period, total households grew 103%, single-family households grew 104% and multi-family households decreased to 94% of what it once was.  While this is interesting, the forecast for the next several decades shows significant growth.  The PSRC's draft results are summarized below in Table 1. 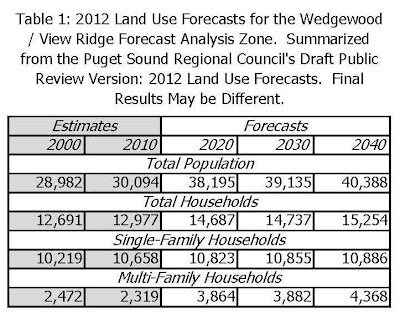 Of particular note is the jump in total population (127%) and multi-family households (167%) between 2010 and 2020. While these numbers may change (they are only in draft format) and are only forecasts, we can be reasonably confident that growth is going to happen. Our City and our part of the City is too wonderful for people not to want to move, live, and work here. The question that we need to ask ourselves is where and how it happens.

What's not shown in Table 1 but is discussed in the PSRC's draft report and forecast results is employment forecasts for the "Wedgewood / View Ridge" FAZ. According to the PSRC's draft results, "Retail" is projected to grow nearly 200% within the FAZ between 2010 (650 jobs) and 2020 (1,296 jobs). The highest growth rate for any category of employment.
Posted by Per at 5:15 PM