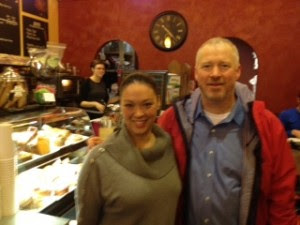 (This originally was posted on the Wedgwood Community Council's website)
UPDATE: The mayor’s office posted photos from their weekend, including their stop in Wedgwood.
UPDATE: Video of the town hall is embeded below.

Mayor McGinn paid Wedgwood a visit on Saturday, March 10th, for a walking tour of 35th Ave NE and to host a community town hall.  The mayor, who arrived on his trusted two wheeled chariot, was also joined by numerous City staff from the Mayor’s Office, Department of Neighborhoods, Seattle Police, Seattle Public Utilities, Seattle Department of Transportation, and Seattle Parks and Recreation.   Additionally, several community members joined the walking tour representing Sustainable NE Seattle, North East Seattle Together (NEST), Eckstein Bikes and Bryant Bikes,Ravenna-Bryant Community Association, and Wedgwood Community Council.
We started the brief walking tour by showing the mayor the new Jasper building and describing the history of recent Wedgwood land use issues including the evolution of the Vision Plan and the ongoing neighborhood planning.  We then walked down to Van Gough Coffeehouse to meet Janet Gibson, who owns the coffee shop.  The walk then carried on south to the Seattle Audubon where the mayor met Russ Steele (store manager), Shawn Cantrell (Executive Director), Cathy Jaramillo (current board president), and Charlie Kahle (incoming board president).  Lastly, we showed off the mayor the Hunter Farm Project and discussed all the different events that occur at the site such as the Wedgwood Art Festival, Planet:HOME, and theemergency preparedness drills.  As we walked, the mayor and City staff were very gracious to share their thoughts and ideas.
Following the walking tour, the mayor hosted a town hall at Wedgwood Presbyterian Church.  McGinn addressed a slew of questions to nearly 70 community members on a range of topics.  Thanks to all that came to the town hall.  A special thanks to Mayor McGinn and all the City staff that came out to Wedgwood and made time to listen to us and our NE Seattle neighbors. Watch the town hall below on the Seattle Channel.
The mayor’s office also posted photos from his weekend neighborhood walk and town hall here in Wedgwood.
Posted by Per at 11:06 PM